This game was made during the OSTJam in January of 2021.

This is good to know! I'm working on finalizing the complete game soon and I'll be sure to add this to the bug list in case I haven't fixed it already :D

It was kinda cool, love the idea! However, I'd enjoy a bit more control over my pieces, watching them making bad moves automatically and interfering with eachother took most of the strategy out of the game imo (please don't let your game become an "autochess" game :) ). Anyway, I quickly reached a perpetual winning situation in each game (even in "no" difficulty) and finally left with hundreds of material (I thought I would someday see a whole army of queens coming against me, but no :( ).

Also, why is the king so hated? :( It's one of my favorite piece, i'd imagine him as a very tanky piece but somehow with low attack. Why not include him in a "protect the king" mode? Or even in current game?

The healing mechanic is really what makes the game easy and in the end it's what you do during almost all your turns (which takes the fun away). As the knight and the bishop seem pretty similar to me (also kind of useless btw), why not somehow make a healing mechanic with the bishops instead?

I love all this feedback! A lot of this is definitely something I want to do and expand on. A few days ago I worked on a option for your pieces (https://twitter.com/ben_burnes/status/1355673828366692353?s=20). I also added a King promotion as well literally like 20 minutes ago. I like the idea that it is tanky with low attack (right now it's something absurd like 30/30 haha).

I agree that I want this game to have SOME strategy in it and not just "click a button and watch stuff happen". Having a move button is a step in the right direction for critical moments.

I might have buffed the healing mechanic a bit too much where it doesn't cost much material to bring a damaged queen back to fighting strength.

Some of your suggestions are definitely in the works already. Especially obstacles and different maps. I definitely have messed with grid sizes and having something be wide but short (like 12x6) REALLY changes the dynamic of the whole game.

The game is programmed to avoid obstacle tiles already. I think it'd be a lot of fun to "break" tiles around the enemy spawn to bottleneck their advance.

An upgrade system would be a bunch of fun too. When making the move system I linked above I thought about giving your pieces a "FRENZY" buff where it would attack until it didn't have a valid target. Might be a little overpowered on a queen though haha

With the manual move system, I was also thinking that you could bring pawns into the opponent's spawn to lock our their tiles, which would lead to a win condition of locking out the enemy.

New pieces is definitely something that would be interesting to explore!

I was thinking about the "full" game and how it might progress and you can unlock new things as you beat levels and stuff. Getting access to spears (move forward like pawns, but can pierce attack one and two tiles ahead) and other unique pieces is totally doable.

Also, relating to the army of queens thing. The wave system is really dumb and basic right now. I definitely want to make that more robust in the future too :)

Seeing as I'm not much into chess or tower defense games, I didn't think I'd really get into this game all that much. But I was wrong. I've been finding myself opening this up on Casual as a way to kill a bit of time, or wind down before bed.

I'm happy to hear that! I'm hoping I can put it together with some win conditions and scoring to keep things moving and progressing :D

This looks really cool! Suggesting an idea for the fuller game you said you're working on, how about different levels with different board sizes/shapes?

Definitely in the works! I found that tall, narrow levels are easier since the pawns advance downward. But if you have a really wide board it gets more difficult because you have more tiles you need to protect! I think there's a lot of room for interesting design :)

Thank you! I'm gonna keep working on this and get a more full game out there at some point. lots of fun things to do with it :D

Man that was awesome to see such innovative idea!

Thanks! Looking forward to working on this more in the future :D

I'm loving the concept of this game! It must have been tedious to code, but it came out great! How did you come up with the idea?

Thank you! It wasn't terrible to put together, though managing the knight's movement was a bit of a pain 😅

I've recently gotten into chess and I guess I just wanted to see if you could do chess in other ways. Then the name Pawndamonium came to mind and I can't resist a good pun :P

Really interesting concept! The blend between the two types of games is really cool. I particularly like how you can see the moves being made as the pieces jump around the board in a really gratifying way. I almost think that the default speed should be set to "Fast" or "Medium" so you can get a better understanding on how the pieces are reacting without messing around with settings.

I know it mentioned it at the end, but I curious to see stats mainly how long I went for. But things like pieces taken out, upgrades purchased, etc would be cool too!

I also think that the game really does do a good job blending with the OST. I think in particular the main menu and credits theme feel like they fit the most with the aesthetic, while the chess theme fits the game play more so than the aesthetic of the game (not saying it is bad, just not as well meshed as the others).

Thanks Charles! I appreciate the feedback. I definitely want to have a stats screen and get more details in the game as a whole. I thought it defaulted to "fast" but maybe I have that initialization programmed wrong, I'll check into it :)

Looking into working on this more in the coming weeks and months!

The game is pretty fun and a cool idea overall.

It's kinda tricky to plan ahead, especially when there is more than one possible targets and I'm not sure where the piece will attack. Maybe there a rule of thumb on what the piece will pick but I didn't figure it out.

I would also liked to have an undo button if I select a unit but then want to pick a different one, but I guess that's not "true" chess if i could do that, is it?

Thanks for the feedback! I didn't put it in the tutorial because it was a lot of text but here is the piece logic:

A few things I've LOVE to do in future versions of the game is to have a "preview" mode for black pieces to plan your move better. I agree it gets VERY chaotic right now haha

oh, cool. Thanks for the reply!

Nice! This was pretty cool! Definitely an interesting mash-up of chess and tower-defense. At first I didn't quite get the upgrade piece feature and was quickly over-run lol. After getting that I was able to last quite a while!

Thanks for the feedback! The tutorial and general game flow could definitely use some tweaking, but I'm glad the core of the game is fun :D 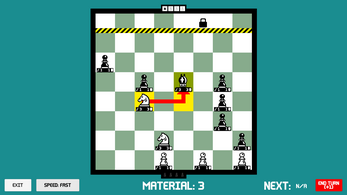 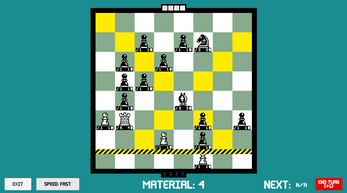 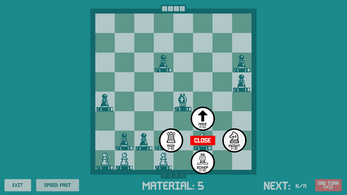 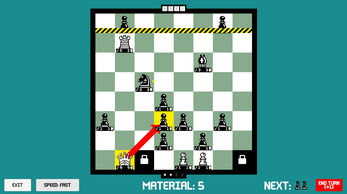