Get the ultra-chill Pawndemonium OST on Bandcamp, or stream it on Spotify.

In order to download this game you must purchase it at or above the minimum price of $2 USD. You will get access to the following files:

As others have mentioned, I've also had issues with the game locking up.

Thankfully this only seems to occur occasionally within the first 0-2 moves of a game, and not later into a drawn out game, so it's not that bad to deal with, just close and reopen the game. I'm really unsure as to the cause, but seems to happen every 2-4 games yea

Edit: happened in the middle of a game after using swap it seems

Thank you for the info! I'm still digging around trying to figure out why exactly this is happening. One of those elusive bugs that's probably buried in a few layers of code.

Maybe it could be something related to the animations? stuff like that can be very elusive. When the game locks up, you are able to like open menus and move pieces and stuff, but when you let go of them they just hang and don't snap to a square, and when it froze after using swap I ended up getting multiple pieces rendered on the same square.

Finds: Upon opening a board with boosters or portals, they won't animate sometimes, and the game stops working, so it's occurring the moment the board is loaded or maybe even before! Background still animates tho, even when the game is locked up.

Returning to menu between boards seems to prevent the issue. (As a super janky fix you could prob just call the code that takes it to the main menu and then call some more code to go back to the level select screen after every board, and then maybe removing some of the code until it breaks could also help isolate the issue)

Hope some of this helps!

Yeah I definitely need to dig through it a bit more. I've been really busy with Life Stuff™ the past few months and haven't had much time to dig through the game and see. What's worse, it doesn't seem to be something that happens in the Unity editor and I have to run a build of the game to recreate the issue. Definitely an illusive issue.

Thankfully, I have a bit more free time coming up so I can dig into it more :)

Unfortunately yea this game suffers from the AI throwing away material constantly. Especially on boards with chokepoints, you  can simply "win" on turn 5 almost, just hit end turn 50 times and bumrush pawns to the end in one move ( https://imgur.com/a/n0lHH7G ). It's also very easy to bait the enemy to throw away the pieces, if it doesn't on its own. I think that the ability to move pieces should become progressively more pricey the more moves are made on a turn, and be more expensive for more valuable pieces (sweeping the board with a queen in one turn definitely shouldn't be possible). Overall the game suffers from a lack of difficulty I think, tho it's still very enjoyable I find!
I think the issue with making the AI more cautious is it would quickly become a war of attrition, yet I think that may be more an issue with the game principles themselves (esp on more blocked boards) than the AI, given that it's predominantly spawning pawns. Maybe have the AI make more intelligent decisions on what pieces to spawn, based on mobility evaluations

I do like this. Right now the wave management is pretty linear (x waves of pawns and then a wave of more valuable pieces), but maybe I can have it be more aware of the board state and react accordingly.

Rn the meta from what I've found just seems to be blockading the board and building up tons of points, then blitzing through the opponent's army. Kinda like a puzzle game early on, maybe it'd be interesting to have some challenge modes where you have a turn limit or only half point income

Yeah, I wonder if setting up piece limits or even a material limit would help the blockading thing. Alternatively, have a "threat level" for the AI where it gets more aggressive with adding new strong pieces if you are just skipping through turns quickly.

I have a few ideas for challenge mode. Specifically a King of the Hill mode where you need to keep a king in the center of the board for X number of turns. It's just finding the time to make that happen at the moment.

Thanks for the thoughts and feedback on this!

Fun idea but the AI seems pretty bad even at 4 stars (e.g. killing their pieces on the spikes or letting them be captured when it's avoidable). I'm enjoying it otherwise but the lack of difficulty makes it feel tedious on larger boards.

Hello! The AI is intentionally a bit predictable with the pawns. Would be smart to see if the next tile would be a dangerous one to step on. For higher value pieces there is a bit more going on when it comes to evaluating their next move.

Good to know about larger boards! I can put it in my notes to mess with the pacing a bit more.

Glad you're enjoying it otherwise, thanks for the feedback!

It's a lot of fun but I still have 100% win rate so I'm worried I'll get bored of it. Have you considered adding a human vs human mode?

I hear ya! Some people I tested the game with struggled a bit, but others understand how chess works a bit better :) I'd love to add a local multiplayer mode, but that would definitely be a huge task the way things are coded currently. Might be a fun thing to try in the future! :D

So I've managed to find a couple bugs. They tend to show up after having played a few games already.

The first one I ran to was on the 8th board. When I started the level I tried dragging a piece (over a spike but I'm not sure if that would matter) and when I released it didn't recognize the move, and even after quitting the level and restarting it I couldn't make a move (or any any other level). Once I restarted the game things worked fine again.

Edit: I'm running into this one every second or third board now. The first game is always fine, the second is 50/50 on whether the first move can be placed or not.

Another time I moved a knight piece and the arrow from its hint stayed on the board for a few more moves (it was towards the end so I won before anything more interesting happened.

I think both times were related to dragging a piece and dropping it at a weird place (or time?). Minor issues since a reboot fixes it but might be something to look into.

Also RE: the AI, the last level is great example of how completely inept they are (especially regarding the extra obstacles). The only way to lose is to not win, there's no way for the AI pawns to ever make it to the opposite side.

Thanks for the info on the bugs too. I'm having trouble recreating them on my computer, but you aren't the first to tell me about some general weirdness happening in between boards and with piece moving. I'll keep digging through the code and see if I have some issues with how pieces are picked up and released.

Been a tough few months for me here so I haven't had much time to mess with the game after the initial release, but these suggestions are definitely going on the list for when I do get to them.

Adding to this, in later levels with enough hazards, I can just continue skipping turns to gather material while the enemy kills itself, then I make a tower that goes from one end to the next avoiding everything, turn it back into a pawn, and move it to the final tile all in one turn. Rinse and repeat unbeatable strategy.

Hah! Yeah I know how to smarten up the AI a bit, I've just been on vacation the past week so I haven't had much of a chance to jam on it yet :)

Lol, there's a bug, after playing one game, when you play a new game, you can't do anything after dropping the Pawn, it doesn't look like it's centered right either.

Woah that's a new one, I'll look into it this weekend thanks for letting me know!

Do you mind letting me know if you're on Win/Mac/Linux? Did this happen every time you beat a level (after restarting the game)? I did a deep dive into the code with no luck, though I did find another game breaking bug so I got that fixed!

I'll keep looking into it!

Thanks so much for the video! Still not 100% sure why this is happening, but the video rules out a few things I thought it was. huh. I'll keep looking into this :)

this bug happened to me also.. windows

Thanks for letting me know. I'll keep trying to figure out where it's coming from :) 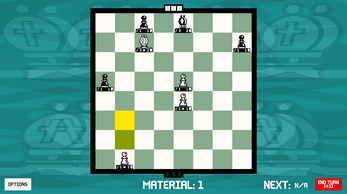 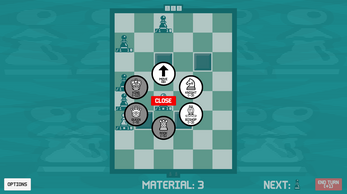 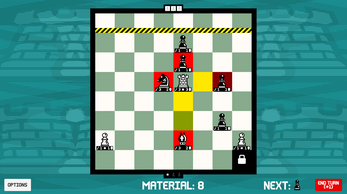 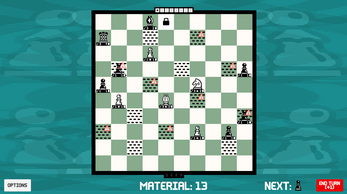